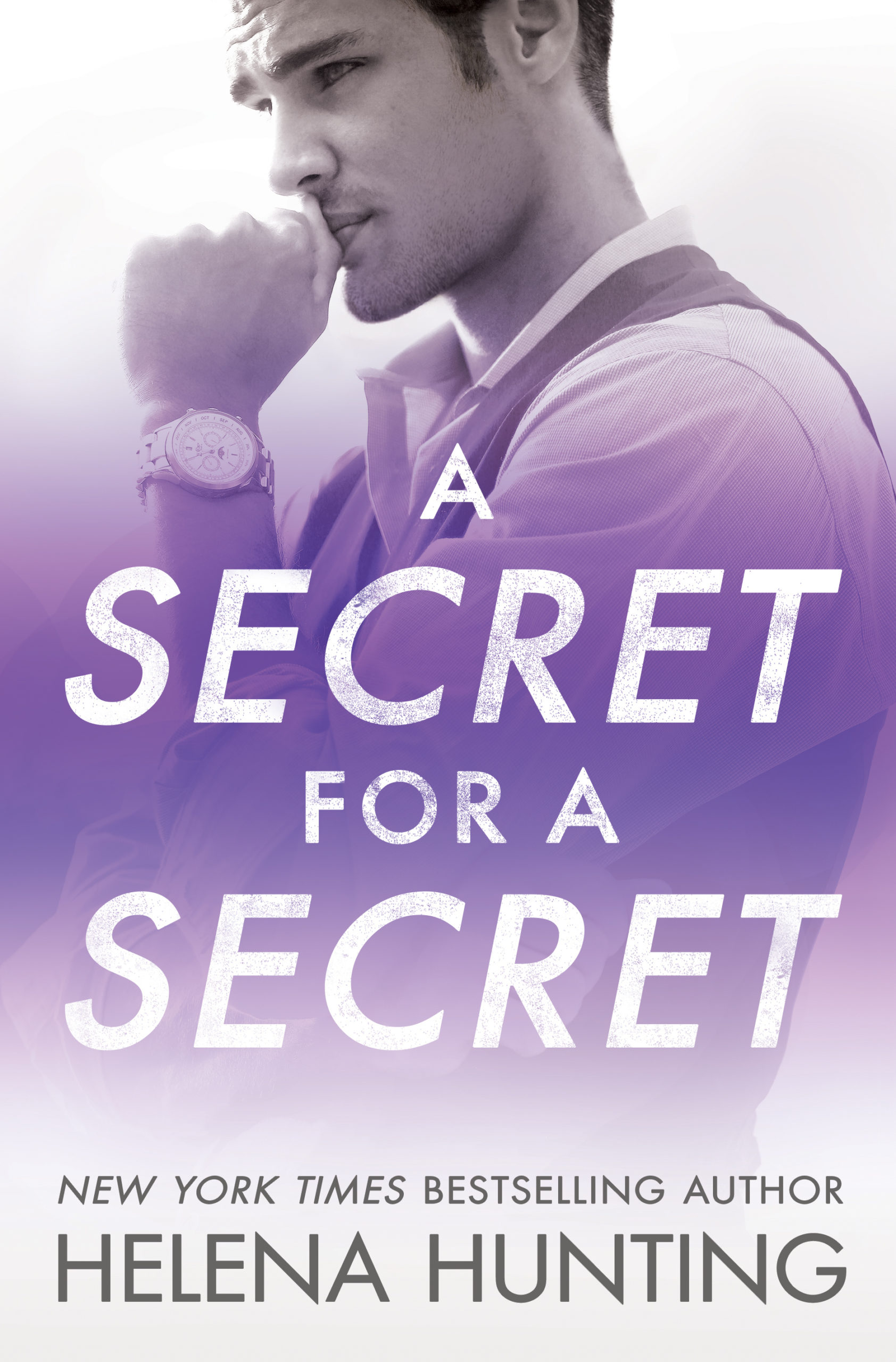 Where To Purchase
Paperbacks:
Ebooks:
A Secret for a Secret
All In Series Book 3
Synopsis

My name is Ryan Kingston, and I’m a rule follower. I’ve never been in a fistfight. I always obey the speed limit. I don’t get drunk, and I definitely don’t pick up random women at bars.

Except the night I found out that my whole existence has been a lie.

I got drunk. And picked up a stranger.

Her name was Queenie, and she was everything I’m not: reckless, impulsive, and chaotic. We did shots and traded secrets. And ended up naked at my place.

She left me a thank-you note in the morning and her panties as a parting gift. But no way to contact her.

Six weeks later I’m sitting in the first official team meeting of the season, and there she is. I neglected to mention that I’m the goalie for Seattle’s NHL team.

And Queenie? Turns out she’s the general manager’s daughter.

I have six different drinks in front of me, ranging from very expensive scotch to some kind of carbonated fruity cocktail that’s so sweet I’m positive I’ll get a cavity if I finish it. Despite the variety, I’m still having trouble getting drunk. Mostly because I’m not a fan of the way alcohol tastes, so I’ve only had a couple sips out of each glass.

“Excuse me, is this seat taken?” A soft, slightly smoky female voice draws my attention to the left, where the stool next to mine sits empty.

I notice several things as her gray-blue eyes, ringed in navy, lock and hold with mine: she’s pint size and stunning, with long chestnut hair pulled up in a loose ponytail, high cheekbones, full lips, and thick lashes that don’t appear to be coated in mascara. But beyond how beautiful she is, she looks sad.

“Uh, no, it’s all yours.” Regardless of my sour mood, I push back my stool and stand, partly to make space for her, since the stools are crammed in close together.

She climbs into the one next to mine before I have a chance to offer my assistance.

“I’m Queenie.” She holds out a hand, and when I do the same, she slips hers into my palm, sending a jolt of unexpected energy through me. The way her eyes flare makes me think she’s felt it too. Maybe there’s something in the air.

“Queenie?” I smile. “I’m Ryan.” I don’t know why I introduce myself this way. No one calls me Ryan except for my parents. Even my siblings call me by our last name most of the time. In part because of my career choice, where my last name is what most people recognize. It’s too late now to backtrack. Maybe I don’t use my last name because my entire identity has been brought into question thanks to today’s events.

“Hi, Ryan.” Her gaze darts down and then back up. Our palms are still connected. And I’m still staring at her.

I release her hand and instantly want to find a reason to touch her again.

The bartender is quick to spot his new customer. I take my seat again while Queenie orders. “I’ll have a vodka martini, extra dirty, extra olives, please. Actually, make that two.”

The bartender’s eyebrows rise, but he gets out his shaker. She stops him when he reaches for the bottle on the shelf behind him and asks for well vodka instead. I’m not sure what the difference is between the two, but that gets another eyebrow raise from the bartender. He fills two martini glasses and drops a skewer of olives into each one. He looks to me before he moves on. “You still doing okay?”

I try not to stare at Queenie, but I can see her reflection in the mirrored bar. She takes a sip out of one glass and makes a face, then does the same with the other one. She transfers one of the skewers of olives to the other glass and downs the whole thing in two gulps.

Her shoulders curl in, and she turns her head away, coughing into her elbow.

She holds up a finger and coughs a couple more times. When she finally looks my way, her eyes are watery and her cheeks are flushed. “Fine, thanks. Well vodka isn’t very smooth going down.”

“Oh.” I don’t know much about vodka. “Why didn’t you have the other kind, then?”

“Because it costs twice as much, and I just lost my job, so I have to get drunk on the cheap stuff.” She plucks one of the skewers of olives from the still-full martini glass and pops one in her mouth.

“I’m sorry that you lost your job.”

She gives me another wry smile. “Thanks. I kind of sucked at it, though, so it’s not much of a surprise. Plus, serving tables isn’t my endgame, so this is sort of a wake-up call to figure out what I want to do with the rest of my life.” She motions to my lineup of drinks. “What’s going on here?”

“I’m trying to get drunk too.”

“You’d have a lot more success if you actually drank them.”

She scans me slowly, her grin growing wider once again. “Can’t really say I’m surprised to hear that. You look like you got lost on your way to a Boy Scouts meeting.”

“I used to be a Boy Scout.” I run a hand over my chest. I’m wearing a white polo and khakis, which is my usual attire. “I was even a camp counselor when I was a teenager.”

She throws her head back and laughs. “God, you’re adorable. And I mean that in a good way.” Queenie props her cheek on her fist. “So tell me why a former Boy Scout and camp counselor would need to get drunk by himself.”

“It’s a little complicated.” I pick up one of the glasses in front of me and take a hefty gulp.

“I’m the queen of complicated. Hit me with it.”

I bite the end of my tongue for a few seconds, debating. “It’s pretty messed up.”

“That’s okay. I’m pretty messed up too. How about this: you tell me why you’re getting drunk, and I’ll tell you why I’m a mess, aside from the fact that I lost a job.” She holds up her pinkie finger. “And we can pinkie swear that whatever we tell each other tonight, we’ll take to the grave.”

I link my pinkie with hers, and again, that jolt of energy hits me. Like the static in the air that comes with a thunderstorm. “A secret for a secret?”

“Okay.” I nod once and blow out a breath. It’s probably easier to tell a stranger this than it is to tell someone close to me. I bend so my mouth is close to her ear and say quietly, “I found out my sister is actually my mom.”

Queenie leans back and rapid blinks several times in a row. “I’m sorry . . . what?”

“My sister is actually—”

“Uh, not really. Is that okay?” I almost feel bad that I don’t want to share more, especially since she’s expressing genuine concern. I do feel a little better about the whole thing, considering her shock and empathetic expression.

“Of course it’s okay. It also totally explains why you have a line of drinks in front of you.” She chews the inside of her lip. “I feel like my secret is kind of lame in comparison.”

“I’m sure it’s not. And you don’t have to tell me if you don’t want to.” I won’t be the least bit surprised if she finishes her second martini and leaves, considering my revelation.

“I want to. Tell you, I mean.” She slurps her second martini and exhales a long breath. “I have dependency issues.”

She laughs again. “God, I love you.” Her eyes flare. “I don’t mean that literally. I just mean you’re cute. The things you say, just . . . anyway . . . I’m not dependent on alcohol, apart from at this moment. I’m dependent on my dad.”

“That’s not necessarily a bad thing, though, is it?”

Queenie pops another olive in her mouth and chews thoughtfully. “He was only twenty when I was born, and he ended up having to raise me on his own. So lots of trial and error in the whole how to deal with raising a kid alone, you know? And I’m really good at messing things up, and he’s really good at bailing me out every single time, so I’ve perpetuated that dependency, and he sort of inadvertently feeds it.” Her nose scrunches up. “Sorry, I’m basically unloading all my baggage on you, and you already seem to have enough of your own to deal with.”

“Please don’t apologize. It’s good to know I’m not the only one with problems.”

“I’ve never actually admitted that out loud before, so it kind of feels good to unload it, even if it’s with a virtual stranger, if that makes sense.”

“It does. Make sense, I mean.” I feel like fate has obviously thrown us together tonight for a reason, so I decide I’m willing to share a little more. “I’m actually the product of a teen pregnancy too. My biological father wasn’t in the picture, and my grandparents decided it would be best if they raised me as theirs to give my sister . . . mom . . . and me a better chance at a normal life.”

“So I guess that means we both have mommy issues.”

“You know what we should do, Ryan?” There’s a hint of mischief in her eyes, the kind I might have shied away from before today.

“You game for getting drunk and forgetting about our mommy issues, at least for tonight?”

She pushes my scotch toward me and clinks her glass against mine. “After we knock back all your drinks, we can do shots.”

My head is pounding.

The last time I had a hangover like this, I was seventeen years old.

I crack a lid and groan when the light streaming through my bedroom window hits my eyeballs. I drag my hand down my face and freeze.

I glance to the right, noting the rumpled sheets and the head-dented pillow. I roll over—which makes me nauseous—and breathe in the sweet scent of vanilla shampoo.

After we polished off all my drinks, we did shots. Which, based on how I’m feeling right now, was definitely not a good idea.

And then I brought her home.

I throw off the covers and sit up. I’m naked. Again, this is atypical. I usually sleep in a T-shirt and boxer briefs. I find a discarded pair on the floor and pull them on so I can go in search of Queenie.

I get as far as the hallway when a yellow Post-it stuck to the doorjamb catches my eye.

Thanks for taking my mind off of my mommy issues last night. And this morning. 😉

I peel it off, hoping she’s left a phone number on the back, but it’s blank. Which is when I notice the scrap of fabric hanging from the knob. I untangle it and realize that it’s a pair of women’s underwear.

A thong, to be exact. A ruined thong.

And this, right here, is the reason I don’t drink. Or bring random women home. Because now I get to feel equal parts guilty and mortified that last night’s sexual-therapy session has only warranted a Post-it goodbye note.

A Lie for a Lie

A Favor for a Favor